Yuliya Lanina’s Earth Mother sculpture symbolizes fertility and motherhood, motifs that appear often in mythology. The artist’s dedication to the earth is illustrated as a large, whimsical female head that emerges from the earth and engenders awareness and respect for the natural world. The piece reminds us that as Mother Earth cares for us, we also care for her. The piece is dedicated to all mothers. 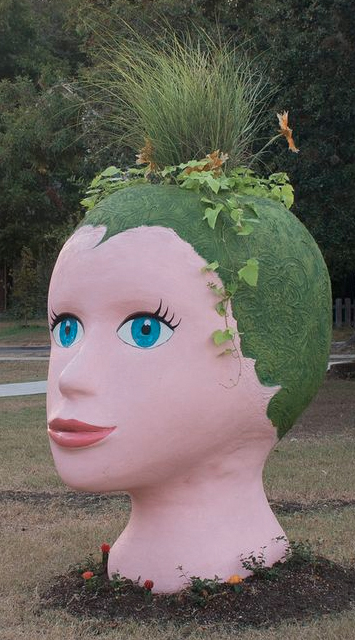 About the artist
Yuliya Lanina is a Russian- born American multimedia artist who lives and works in Austin, TX. Lanina draws from many sources to create her work. Though she often taps into Greek mythology she also relies on Russian fairy tales, which are filled with fantastic beings deeply rooted in paganism, mysticism, and symbolism.

To learn more about Yuliya Lanina and her work, please visit her site: www.yuliyalanina.com

The Earth Mother sculpture is available for sale. The price is $5,000 with a portion of the proceeds benefiting The Bee Cave Arts Foundation. Contact the artist directly at yuliyalanina@gmail.com if you are interested in acquiring the piece.

The Earth Mother sculpture has been commissioned by AIPP and exhibited at Ramsey Park, Austin, TX, prior to relocating to Bee Cave Park.