Susan Gulla O’Leary hails from Austin, TX and has exhibited art around the country.

“The Beehive” sculpture was inspired by the legend of “bee caves” .  As one story goes, Bee Cave, Texas was named after the Mexican honey beehives that were found along the Barton Creek in the 1870’s that were so big that a man could stand in them; so locals began to call them “caves”.  Another folktale lets us imagine a beehive that gradually grew from a normal size beehive under the eaves of Carl Beck’s general store on Highway 71 to be so large that travelers made detours to stop and visit the “bee cave”.  And there is the account by locals of a large cave of  wild bees that grew honey lovers from around the area and ultimately became the site of the 1870 United States Post Office that staked the City of Bee Cave.  All these tales conjure images and feels of enchantment with the grandeur of the Texas Hill Country we live in.  While speed of life is ever increasing, standing in this Park, one feels the same beauty and magic that captivated those who settled Bee Cave, Texas. 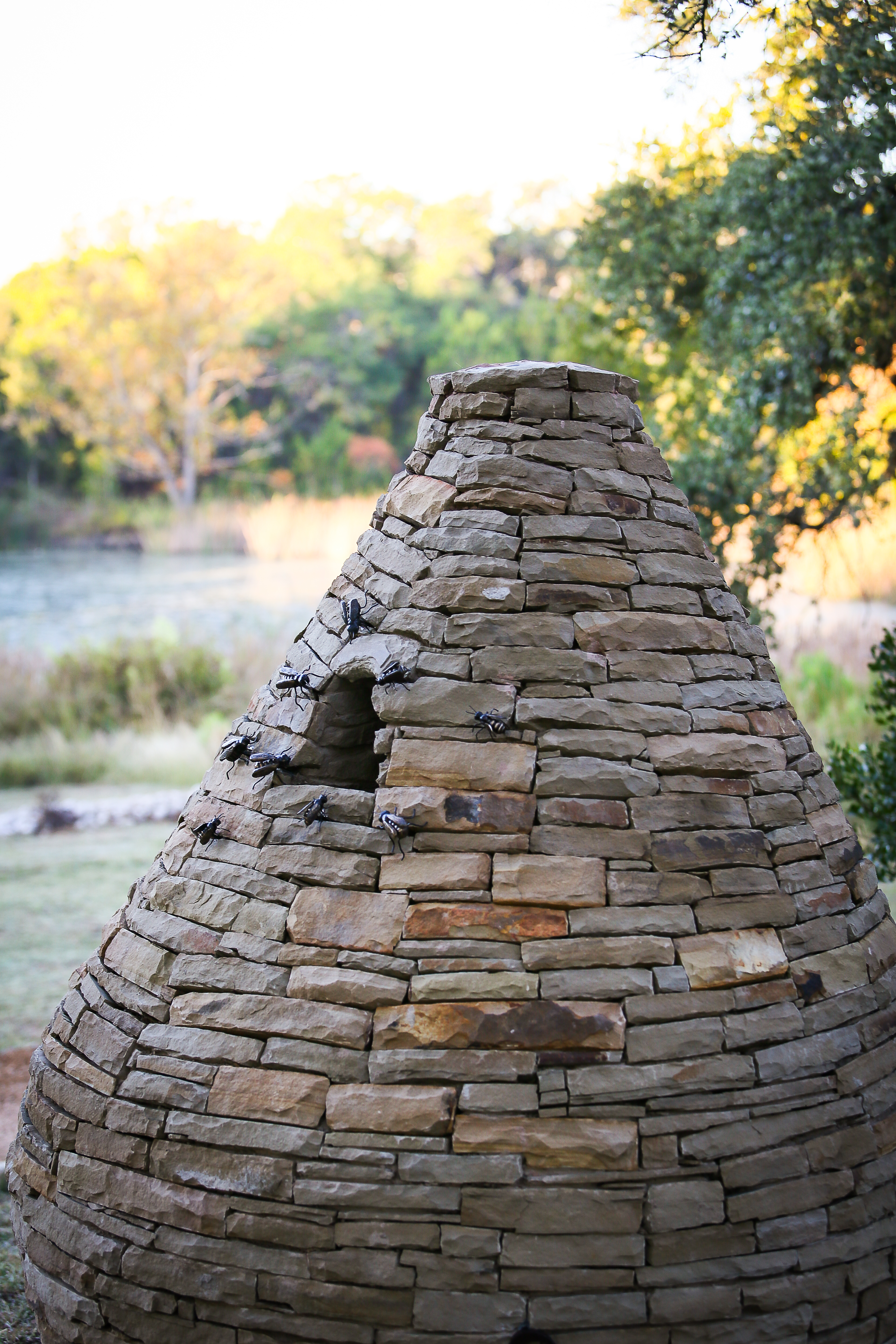 “The Beehive” sculpture stands a tribute to the old and the new.  It is based on the ancient tradition of cairns (/ke(ə)rn/) or càrn.   These stack-stone memorials were erected as landmarks and memorials that can stand for more than a millennia.  “The Beehive” cairn stands in the modern oasis of Bee Cave Sculpture Park as meaningful landmark to the majestic bee hives that are the namesake of Bee Cave, and, of course, as an inspiration to all of us to continue to pass on “the legend of the bee cave” for generations.

Special thanks to all of those that donated towards the Queen Bee or sponsored a Drone or Worker Bee:

Here is a little more about Susan…

A local artist in the Lake Travis Hill Country, Susan grew up and raised her family in Austin, Texas.  She expresses her artistic talent by creating art in a variety of media and techniques.  The versatility of her works is a testament to her skills.  She enjoys the process of each individual work of art as it takes form and life.

Susan’s portfolio consists of oil and watercolor paintings, both realism and abstract, and life size and miniature portraiture.  She is also an accomplished sculptor producing three-dimensional figurative pieces in bronze or carved stone.  Her paintings and sculptures are both universal and thought provoking.

A great deal of intuition and passion go into everything she creates.  The paint dances on the canvas so a sense of movement captivates the observer.  She chooses images that pulsate light, incorporate shadows and pull together the energies between heaven and earth laying color and texture.

In 1988, Susan made her first attempt at sculpture and she realized her talent’s passion.  She “feels” what she “sees”, enabling her to transform the essence of an object into an “alive” sculpture – in the sense that when you view her rendering of the subject, your senses are pleasantly awakened.  Her art transcends more than what superficially meets the eye!

Susan’s work is vibrant with a purity of fluency that calls up emotions and embraces the senses.  She is inspired by God’s overwhelming beauty in nature.  She uses her talent to channel beautiful but fleeting images of nature, emotion and life’s wisdom onto canvas and into sculpture.  Her works awaken personal reflection and deep thought.  With Susan’s works, we feel the truth of art – a peaceful mind, quiet calm, a sense of excitement, connection and reflection.

Susan studied watercolor painting under close friend and world renowned Artist, Bill Worrell of Art, Texas.  Worrell inspired her to artistically reach beyond what is seen with the eyes.  Worrell encouraged her to use her God given talent, combined with all her senses and “to find a niche, something no one else is doing, a style all (her) own and to practice, practice, practice!”

She has taken part in many group exhibitions, participated in art symposiums at the Elisabet Ney Museum, Majestic Ranch Arts Foundation, the La Piazza Italian Art Festival at Laguna Gloria Museum and more.  Susan studied under Ulmer Rachman, CEO of the Majestic Ranch Arts Foundation and stone carving teacher of sculpture.  Rachman had a philosophy that creativity is essential to well being and sculpture provided a meaningful balance in his life.  This philosophy was contagious and inspired not only his personal and professional pursuits but those of many of his students, including Susan. Ulmer Rachman made an indelible contribution to the Arts.

In addition to giving private lessons in her studio, Susan has taught sculpture classes at Umlauf Sculpture Garden and Museum, and in other public and private schools in and around Austin.  Susan’s sculpture “Off to a Safe Place (brother and sister)” was commissioned by the Austin Children’s Shelter.

This sculpture was a donation by Susan Gulla O’Leary and ASAP Stone and Landscaping.